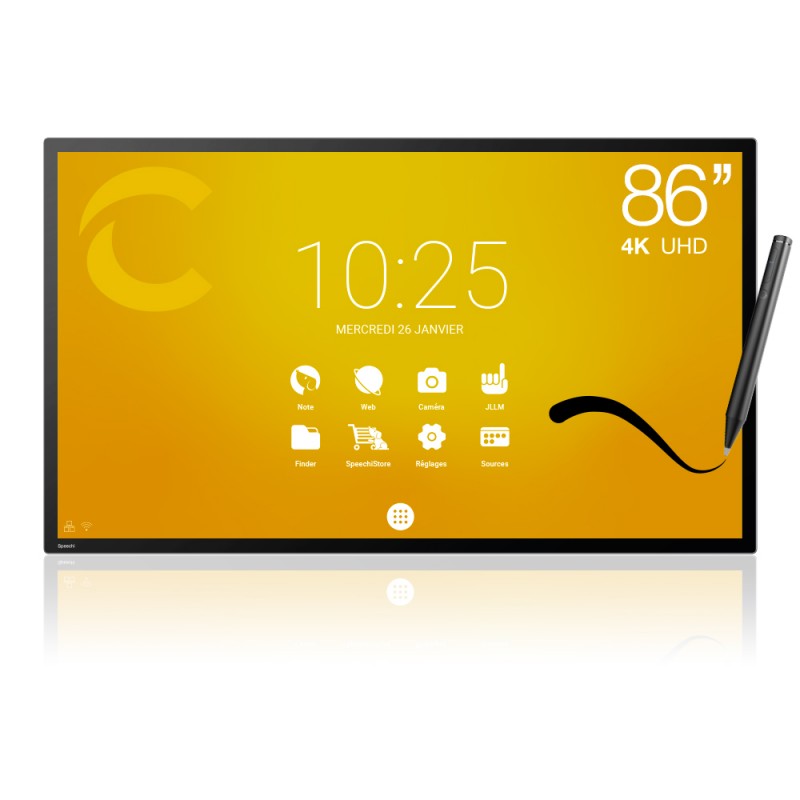 The minimum purchase order quantity for the product is 1

Detecting 1024 pressure levels, rejection of the palm of the hand, features related to the capacitive technology that make the writing more natural, either on the finger or with the 2 high-precision active styluses provided with the screen.

With capacitive technology, the SpeechiTouch tactile screen achieves unparalleled responsiveness and accurately and closely reflects what you write and draw.

The Android chip integrated into the SpeechiTouch capacitive screen is very powerful, you can install on the screen apps that require a high-performance Android system to run them, without having to provide an additional Android OPS to increase the capabilities of the screen.

Write on the capacitive screen on the finger as on the stylus. Because it recognizes pressure levels (1024 levels), the SpeechiTouch Capacitive Screen is perfect for graphic design jobs. The more you press the stylus, the thicker the line will be. To avoid false detection, your finger and the screen content interact only when there is contact. To ensure greater writing comfort, you can use your stylus while placing the palm of your hand on the screen without it notching anything. The capacitive screen is, in fact, designed to recognize and "ignore" your hand when it serves as support for better writing or drawing.

In annotation software like Note (present on the Android part) or Iolaos (installed on the PC OPS not provided), the two styluses are differentiated. The SpeechiTouch capacitive screen is able to identify both pens and distinguish them from each other. Thanks to this feature, give the two pens a different color.

An interactive multitouch screen to write with others

A perfect collaborative tool, the SpeechiTouch capacitive screen recognizes up to 20 contact points and 10 simultaneous writing points to intervene with others without any conflict on the screen. Interact with the two at the same time and assign your respective pens a different color and writing thickness.

Thanks to its 4K UHD (3840 x 2160 pixels) resolution, the Speechitouch capacitive screen is an excellent display medium with which you can enjoy images in their smallest detail.

The SpeechiTouch capacitive tactile screen features two 2X 15W side speakers and a 15W subwoofer. Power and quality of sound essential for quality videoconferencing sessions and a layout of its speakers, which invites you to immerse yourself when watching your videos.

A tactile "glass only" screen

If the SpeechiTouch Capacitive Interactive Screen is a useful working tool, it is also a tactile screen that has style. Thanks to its absence of rim and perfectly smooth glass surface, this capacitive screen is perfectly flat like smartphones. A solution of display and aesthetic presentation that will match showrooms and any space dedicated to high-class receptions.

A featherweight for more freedom of layout

The capacitive screen SpeechiTouch weighs only 45 kg. A weight advantage if you want to integrate your screen in the most harmonious way to your space: hung on a wall or attached to a mobile stand.